When you register for an account, you will be able to track your payment statuses, track tour confirmations, view invoices, and also rate your tour experiences.
Register
1162

On this East Coast tour, discover some of the historic national treasures prominent in America’s history. Step back in time in Jamestown settlement, the first permanent English settlement in the new world, and Colonial Williamsburg, where costumed villagers re-enact life in 18th -century Virginia. See the meeting place for Thomas Jefferson, Patrick Henry, and other patriots, and enjoy a Colonial-style dinner at a local tavern, where you’ll experience a re-created supper experience savored by 18th-century patriots. Visit Richmond’s St. John’s Church, where Patrick Henry proclaimed, “Give me liberty or give me death.” Tour Jefferson’s beautiful and imposing estate, Monticello, and visit George Washington’s restored home, Mount Vernon.

Visit the sites of many famous battles, including Yorktown Historical Battlefield Park, where the British surrendered to Washington’s troops in 1781. Tour Gettysburg National Military Park, where you’ll hear about the Battle of 1863. Continue exploration at Valley Forge National Historic Site to see where Washington and his troops endured the harsh winter of 1777-1778. Also visit Harpers Ferry National Historic Park, where abolitionist John Brown and his “army of liberation” staged their fateful raid on a U.S. arsenal. This East Coast tour will also visit Washington DC and Philadelphia—with sightseeing tours highlighting the famous landmarks in each city.

Throughout this East Coast tour, Globus has also included many special experiences. For example, learn about Shenandoah National Park’s history and lore from a local storyteller and hear an exclusive presentation by Ulysses S. Grant at Gettysburg.

Welcome to Washington DC! At 6 pm, meet with your traveling companions for a welcome drink. Your Tour Director will prepare you for your upcoming adventure.

This morning’s sightseeing features many of Washington DC’s famous landmarks, including the LINCOLN, VIETNAM, and KOREAN Memorials and stop for photos at the White House and Capitol Hill. This afternoon, we visit MOUNT VERNON, the restored home of George Washington. Tour the house and gardens, and visit the gravesites. Try our optional dinner tonight at one of Washington’s favorite restaurants, followed by an illumination tour of the monuments.

Today, visit YORKTOWN HISTORICAL BATTLEFIELD PARK, where the British surrendered to Washington’s troops in 1781, bringing an end to the American Revolution. Continue to Williamsburg for a 2-night stay.

This morning, enjoy an exclusive PERFORMANCE from Sylvia Tabb-Lee, a professional historian. Visit the nearby JAMESTOWN SETTLEMENT for a guided tour to learn about the first permanent English settlement in the New World. Then, enter COLONIAL WILLIAMSBURG’S HISTORIC AREA, where costumed villagers add to the authenticity. Stroll down its quaint streets, browse through the historic trade shops, and see the Public Gaol. Also, be sure to stop at Raleigh Tavern, the meeting place for Thomas Jefferson, Patrick Henry, and other patriots. This evening, enjoy a Colonial-style dinner at a famous local TAVERN for the chance to engage in a recreated supper experience savored by 18th-century patriots.

First stop is Richmond, Virginia’s capital and once the capital of the Confederacy. Visit ST. JOHN’S CHURCH, where Patrick Henry proclaimed, “Give me liberty or give me death!” Next, MONTICELLO, Thomas Jefferson’s estate with its beautiful gardens and imposing mansion designed by Jefferson himself. Spend the evening in Staunton, nestled in the foothills of the Blue Ridge Mountains.

Today, journey to beautiful SHENANDOAH NATIONAL PARK, home to spectacular vistas, and a haven to wildlife. Enjoy photo stops and panoramic vistas from Skyline Drive. During your free time today, why not join in a ranger-led program, stroll one of the many hiking trails, or just sit back and enjoy the scenery?

Today, follow the same route as Lee’s army during its invasion of Pennsylvania. In West Virginia, visit HARPERS FERRY NATIONAL HISTORIC PARK, where John Brown and his “army of liberation” staged their fateful raid on a U.S. Arsenal. Continue across Maryland to GETTYSBURG NATIONAL MILITARY PARK. Enjoy a tour of Gettysburg and hear your Local Guide vividly recount the Battle of 1863. Also, spend some time exploring the newly renovated museum and cyclorama. This evening, enjoy a Colonial-style candlelight dinner at the elegant DOBBIN HOUSE TAVERN, listed on the National Register of Historic Places.

SPECIAL FEATURE: Overnight at the historic Hotel Gettysburg, established in 1797. President Lincoln honed the immortal words of his Gettysburg Address just steps away from the hotel, and nearly a century later, the hotel served as President Dwight Eisenhower’s National Operations Center.

This morning, enjoy an exclusive PRESENTATION by one of America’s heroes of the 19th century—Ulysses S. Grant. Then, travel through Lancaster County past Amish farmlands to VALLEY FORGE NATIONAL HISTORIC PARK. Take a tour of the national historic park, the camp where Washington and his troops endured the harsh winter of 1777–1778. See Washington’s headquarters, the Grand Parade, and the Washington Memorial Chapel. Continue to Philadelphia, where your Tour Director hosts a special farewell dinner on the historic Moshulu ship. Launched in 1904, she has had a long and exciting career on the seas and is now considered one of Philadelphia’s best restaurants.

Morning sightseeing focuses on the important buildings of this historic city, the “Birthplace of the Nation.” Major attractions at INDEPENDENCE NATIONAL HISTORICAL PARK include the LIBERTY BELL and INDEPENDENCE HALL. Continue to the Philadelphia Airport for guests with homebound flights (please schedule flights from the Philadelphia Airport after 1:30 pm). For passengers who would like to return to Washington DC, the motorcoach transfers to the Capital Hilton at no additional cost. 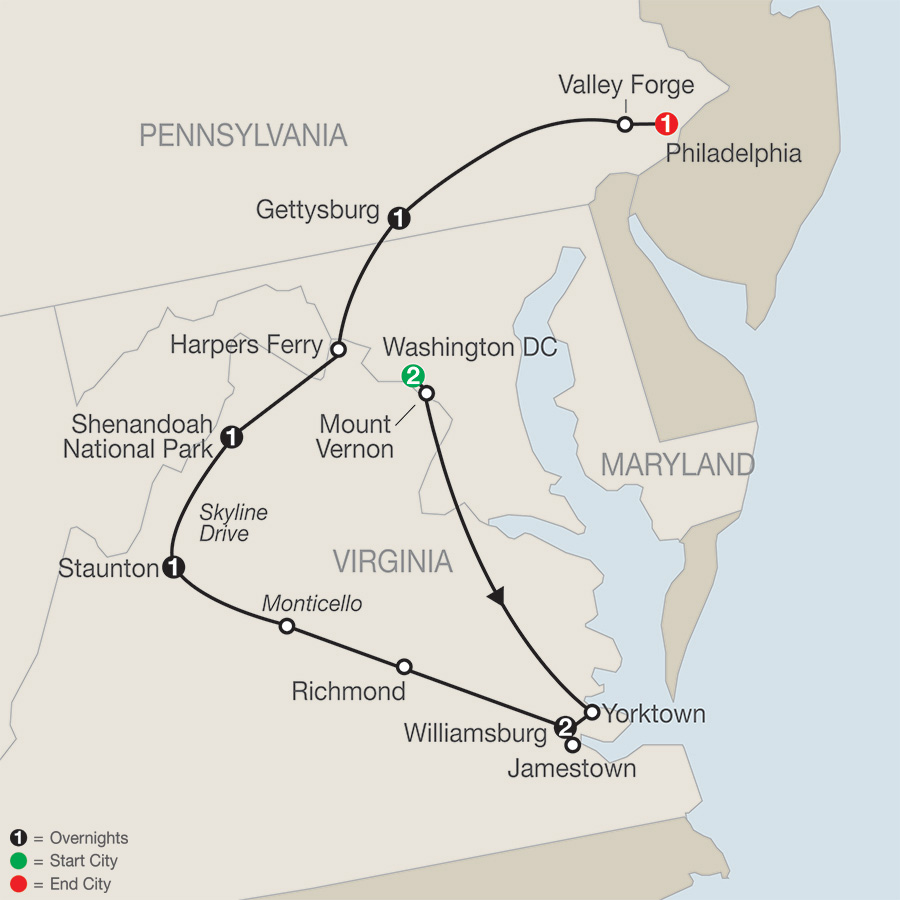