When you register for an account, you will be able to track your payment statuses, track tour confirmations, view invoices, and also rate your tour experiences.
Register
1452

Breathtaking scenery, historic sights, and fun experiences await you on this Newfoundland tour with overnights in St. John’s and Clarenville.

This Newfoundland tour also features spectacular scenery. A tour highlight is a narrated cruise on Witless Bay, home to seabirds, whales, and puffins. Be sure to have your camera ready! In Cape Bonavista, marvel at the rocky shores, pebbled beaches, and picturesque fishing boats. Travel part of the scenic Irish Loop, home to charming fishing villages and breathtaking scenery.

On this tour of Newfoundland, Globus has included some out-of-the-ordinary experiences to make your vacation unique, such as a traditional fish and chips lunch in Trinity and a tour and sampling of iceberg beer at the Quidi Vidi brewery, St. John’s largest craft brewery.

All of this and more await you on this remarkable Newfoundland vacation!

Welcome to St. John’s, the capital and largest city in Newfoundland. At 6 pm, meet your traveling companions for a welcome drink. Your Tour Director will prepare you for your upcoming adventure!

Today’s city sightseeing includes a visit to St. John’s most popular landmark, SIGNAL HILL NATIONAL HISTORIC SITE, which recalls the town’s historic past and communications triumph. Have your camera ready for fantastic views! Sightseeing also includes a visit to Cabot Tower, Old Town, the Basilica of St. John the Baptist, and the colorful houses of Jelly Bean Row. Next, the charming neighborhood of Quidi Vidi, where we visit the local BREWERY for a tour and tasting. You’ll even get to sample their famous iceberg beer! The remainder of the day is at leisure to explore more on your own. This evening, why not visit lively George Street with its array of restaurants and pubs?

Today, travel part of the scenic Irish Loop, home to charming fishing villages and amazing scenery. Visit the COLONY OF AVALON and learn how it was founded in 1621 by George Calvert, later Lord Baltimore. Ongoing excavations have revealed the locations and designs of many original structures, as well as more than two million 17th-century artifacts. Over lunch today, be entertained by local MUSICIANS. Before arriving at your hotel, we’ll stop for a tasting at a WINERY, famous for its variety of berry wines, including wild blueberry. Arrive in Clarenville for a 2-night stay.

This morning, visit RYAN PREMISES NATIONAL HISTORIC SITE, which commemorates the prosperous fishing industry from the early 1500s to present day. Next, travel to historic Trinity, one of the oldest communities in North America. Enjoy a guided WALKING TOUR and hear stories that bring this picturesque village to life. Lunch today is local fare of tasty Newfoundland FISH & CHIPS. Continue to Cape Bonavista, where you’ll see the interesting Cape Bonavista Lighthouse, see the famous Dungeon rock formation, and admire the beautiful cliffs and coastlines. In Bonavista, learn how modern North America began when John Cabot made landfall here in 1497.

Rejoin the Trans-Canada Highway and journey to the Avalon Peninsula. Drive through Heart’s Delight and Heart’s Desire to the small town of Heart’s Content to visit the HEART’S CONTENT CABLE STATION PROVINCIAL HISTORIC SITE, where the first transatlantic cable was completed in 1866. Continue to CUPIDS COVE PLANTATION, the archaeological site of the oldest official British colony in Canada. Founded by John Guy in 1610, you’ll learn the history of the settlement, hear stories about its colorful characters, and see artifacts at CUPIDS LEGACY CENTRE. Return to St. John’s, where the evening is at your leisure.

This morning, travel to Witless Bay, where whales and puffins abound. Board your boat for a narrated CRUISE around the islands. Newfoundland has the largest concentration of humpback whales in the world, and is also known as the “Seabird Capital of North America,” with the largest Atlantic puffin sanctuary in North America. Return to St. John’s with a stop at CAPE SPEAR NATIONAL HISTORIC SITE, the most easterly point in North America. The afternoon is free to explore more of St. John’s on your own or perhaps shop for a favorite souvenir. This evening, your Tour Director hosts a special farewell dinner that includes a traditional SCREECH-IN ceremony—the perfect ending to your time in colorful Newfoundland!

The tour ends this morning with guests departing on individual schedules. Airport transfers are provided. 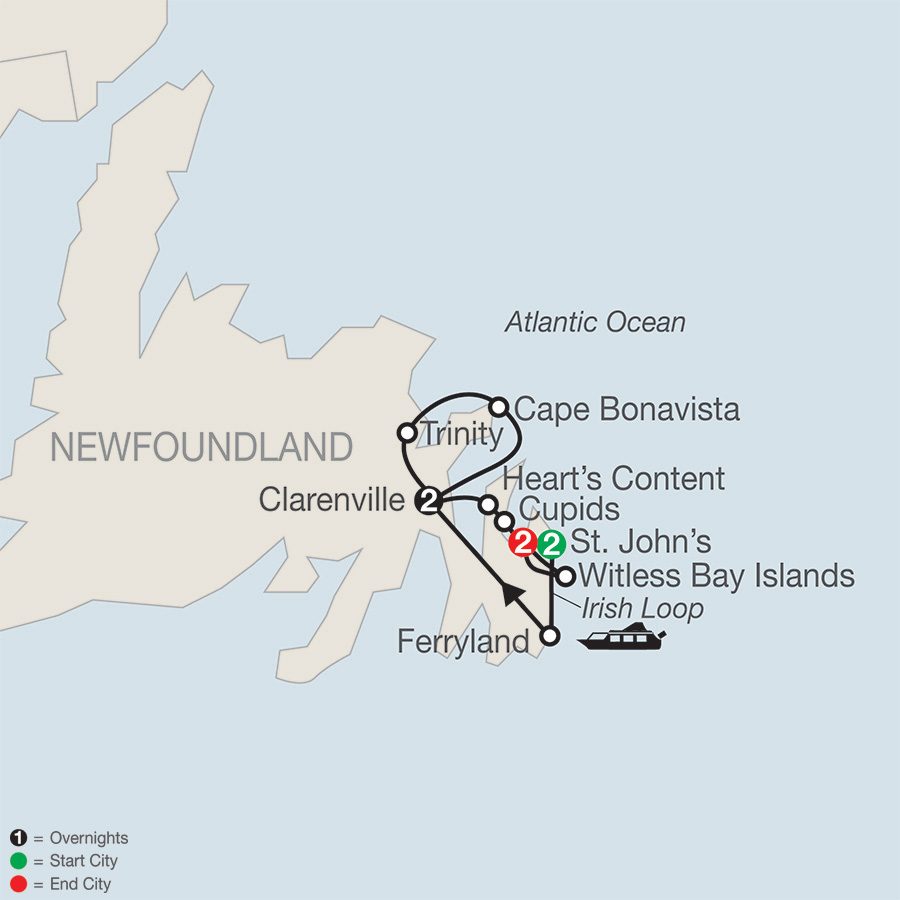 Ultimate Alaska & The Yukon – 13 Day Tour from Anchorage to Anchorage