Or continue as a Guest

When you register for an account, you will be able to track your payment statuses, track tour confirmations, view invoices, and also rate your tour experiences.
Register
90

For six days, we will embark on a unique trip through the Green Spain, following the winding metre-gauge railway bordering the Bay of Biscay. From Bilbao to Gijon or vice-versa, we will visit its cities and explore its towns, on the coast and inland, going up to the lakes of Covadonga in the heart of the Picos de Europa mountains. You will savor the North of Spain’s gastronomy, one of the most renowned nationally and internationally.

Welcome meeting at Concordia Station in Bilbao at 12:00 pm

Welcome meeting at Concordia Station in Bilbao at 12 noon on board the train, meet the crew and settle into your accommodation on board. Lunch and a tour of the city; a vibrant town that has reinvented itself after the decline of its traditional heavy industry. Includes the entry ticket to the famous Guggenheim Museum, the iconic symbol of the new Bilbao, and a visit to the Portugalete Hanging Bridge. Enjoy fine dining and fantastic scenery on board this evening on the way to Marrón/Ampuero where you will spend the night.

After leisurely breakfast on board, the luxury coach will take you to visit Santoña with its spectacular Biosphere Marsh Reserve, with a visit to one of its traditional anchovy and Albacore tuna canning factories and then a tour of the town with a boat ride across the spectacular bay to visit the quaint seaside town of Laredo. Enjoy lunch on board the train on the way to Santander, the elegant capital of Cantabria, where you can ponder spectacular panoramic views and enjoy free time to experience this beautiful location in your own way. Dinner at a well-known restaurant in the city. After dinner, you can visit the Sardinero Grand Casino with entry included. Overnight in Santander

Enjoy your breakfast to the clickety-clack of the rails and spectacular landscapes on the way to Cabezón de la Sal, where the luxury coach awaits to take you in comfort and style to the town of Santillana del Mar, with its magnificently preserved Medieval historic quarter and the famous Altamira ‘Neocave’, a museum and scientific reproduction of the finest Upper Palaeolithic rock art ever found. After lunch, the train returns to Ribadesella in Asturias, with a tour, dinner and overnight stay in Arriondas.

Breakfast on board in Arriondas while the train glides along the iron rails into the heart of the Asturias Principality. Visit the magnificent Picos de Europa National Park, ascending to Enol Lake, and then the Covadonga Sanctuary; a sacred place full of tradition and legends. Next, Cangas de Onís, the first capital of the Asturias Kingdom founded by Pelagius of Asturias. After lunch on the train, which will emulate the International Descenso de la Sella festival, the adventure continues towards to Llanes. Tour and overnight stay in Llanes.

Enjoy a leisurely and scenic breakfast on the way to the next stop, Oviedo, the capital of the Asturias Principality and the heart of pre-Romanesque Asturias, with treasures such as San Julián de los Prados. Enjoy the city and a delicious breakfast to sample some the local produce and renowned friendly hospitality. The train will arrive at Candás in the afternoon. Discover Avilés, an ancient town with a beautifully preserved and valuable historic centre. Dinner and overnight stay in Candás.

After breakfast, pack up your bags and say goodbye to your travel companions on the train. The coach will take you to Gijón, a city that is wide open to the great Cantabrian Sea and hosts an extensive range of cultural events. After the visit, enjoy lunch at the spectacular Gijón Parador, where the trip will end at approximately 4:00 pm. 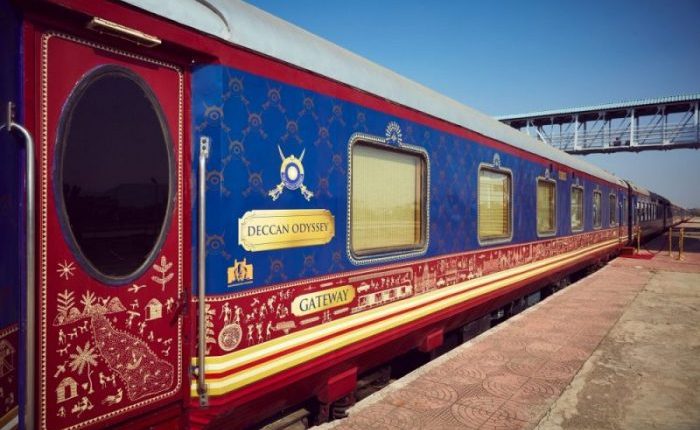