Wonders of Jordan – 7 Day Tour from Amman to Dead Sea

When you register for an account, you will be able to track your payment statuses, track tour confirmations, view invoices, and also rate your tour experiences.
Register
430

Ancient sights and fascinating landscapes await you on this Jordan tour that begins in Amman, Jordan’s capital, and ends at the Dead Sea, the lowest place on Earth. In between, you’ll visit many of Jordan’s amazing sights.

Amman is one of the world’s oldest continuously inhabited cities with a history spanning nine millennia. Here, guided sightseeing includes a visit to the Roman amphitheater and excursions to Umm Qais and Jerash, a well-preserved Greco-Roman city buried for centuries under desert sands. Also enjoy guided sightseeing in Petra, a UNESCO World Heritage Site and one of the New 7 Wonders of the World®, where you’ll admire this amazing city carved directly into the sandstone rock. Here, Globus has arranged an unforgettable experience for you. You’ll walk down the Siq, a narrow gorge with spectacular colors flanked on either side by high cliffs. At the end, you’ll stand in awe in front of the iconic and famed Treasury, carved out of the sheer sandstone cliff in the 1st century BC. Additionally, sip tea in a Bedouin tent. The Bedouin are semi-nomadic people still inhabiting this region, and this is a special experience offered by Globus.

Another unique experience offered by Globus is a 4-wheel drive to the desert of Wadi Rum, virtually untouched by humanity with its incredible landscape, monolithic rockscapes, and centuries-old paintings spread on the rocky outcrops. You’ll also visit Kerak, and its 12th-century Crusader Castle; Wadi Mujib, the “Jordanian Grand Canyon;” Madaba, home to a 6th-century, tiled mosaic map of the Holy Land; Mount Nebo, the holy site where Moses first saw the Promised Land; Bethany Beyond the Jordan, where Christians believe Jesus was baptized by John the Baptist; and the Dead Sea.

All of this and more are waiting for you on this fabulous Wonders of Jordan tour.

Arrive at Amman Airport and transfer to your hotel. Balance of the day is at leisure. Enjoy this evening’s welcome dinner with your traveling companions, hosted by your Tour Director.

Start this morning with guided city sightseeing of Amman and a visit to the ROMAN AMPHITHEATER. Later, travel to JERASH, which was inhabited as early as 3200 BC. Although the city was impacted by the earthquake of 749 AD, it is the site of the best preserved Greco-Roman ruins in the Middle East. Next, stop in Umm Qais, site of the Gadarene swine miracle.

An exciting visit to Wadi Rum is on the program today. Wadi Rum is the largest wadi (ravine) in Jordan and made eternally famous through the movie Lawrence of Arabia. Enjoy spectacular FOUR-WHEELING through the sand dunes and receive a keffiyeh, a local headscarf. Continue to the “Rose-Red City” of Petra, where you can relax at your hotel this evening or explore the ancient city.

Full day of guided sightseeing in Petra, a UNESCO World Heritage Site and one of the New 7 Wonders of the World®. Lost to the world for centuries, it is located in the biblical land of Moab. Enjoy an unforgettable experience as you walk down the SIQ, the narrow gorge made famous in the movie Indiana Jones and the Last Crusade. Stand in awe in front of the iconic and famed TREASURY. You’ll see spectacular temples and tombs created out of the rose-colored sandstone, and sip tea in a real BEDOUIN TENT.

This morning features Kerak, with a visit to the CRUSADER CASTLE and Wadi Mujib, the “Jordanian Grand Canyon.” Continue to your hotel at the Dead Sea for your 2-night stay.

A fascinating day awaits! Stop in Madaba to visit ST. GEORGE’S CHURCH, which houses a precious 6th-century mosaic map of the Holy Land. Also explore the MADABA ARCHAEOLOGICAL MUSEUM. Today’s major highlight is a visit to MOUNT NEBO, where Moses saw the Promised Land. Next is Bethany Beyond the Jordan, where Christians believe that Jesus was baptized by John the Baptist. Back at the Dead Sea tonight, enjoy a farewell dinner with your traveling companions to celebrate an unforgettable journey.

Your vacation ends with breakfast this morning (the nearest airport is Amman). 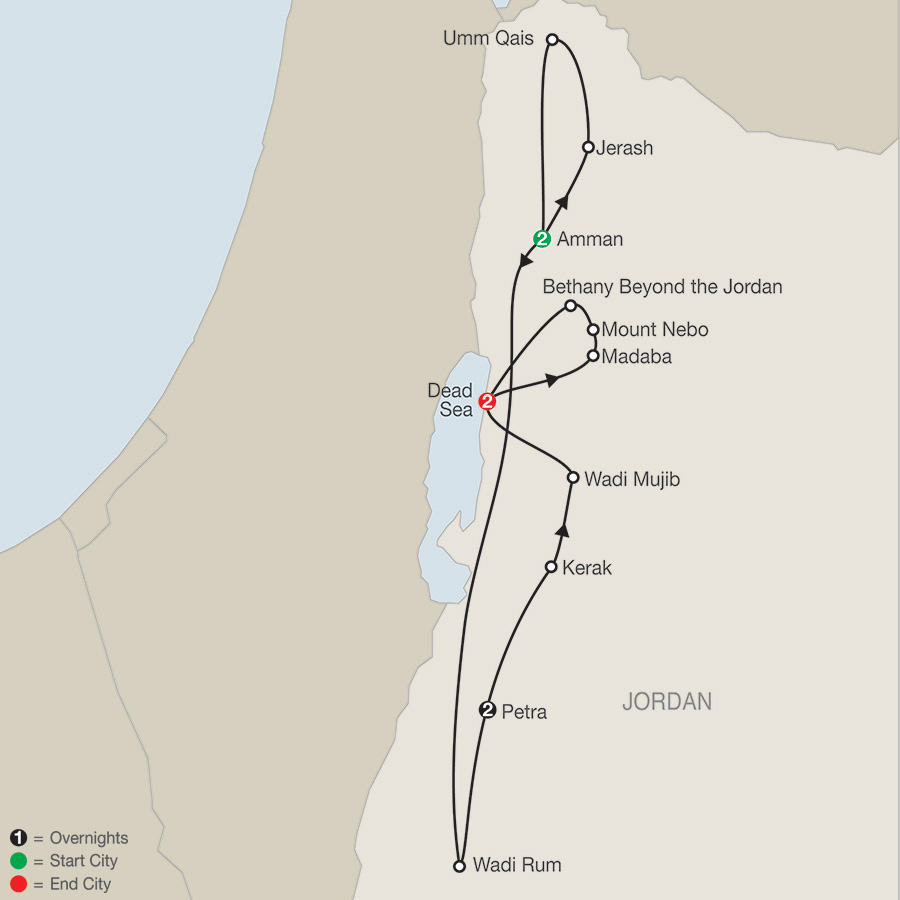